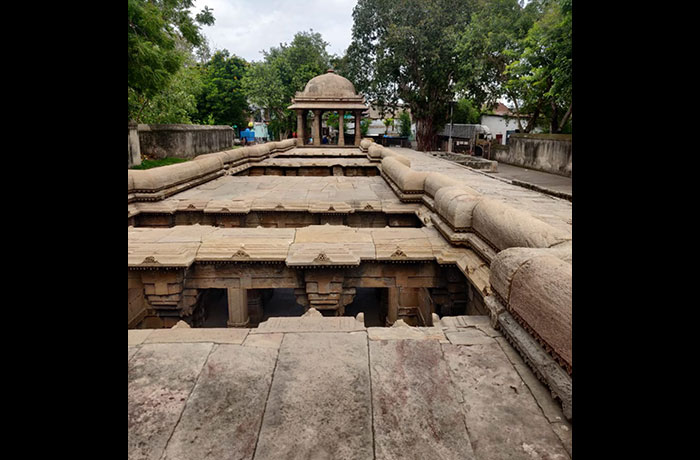 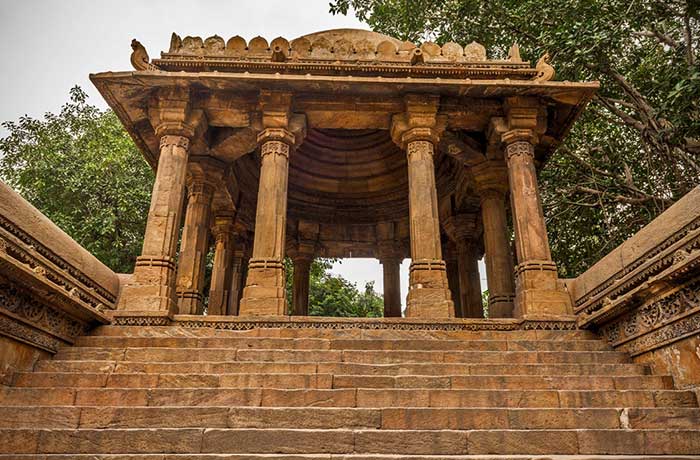 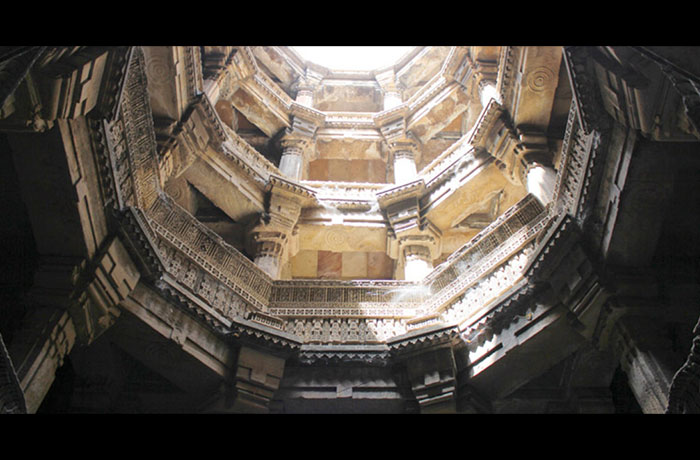 Dada Harir ni Vav lies 15 km from the centre of Ahmedabad city It is a five-hundred-year-old vav, built during the reign of Sultan Mahmud Begada. There is a slight confusion as to the exact year of construction of this vav. A Persian inscription on the wall of this stepwell states that it was built in the year 1485 while a Sanskrit inscription on another wall states the year of its construction as 1499 A.D.
This vav was built by Bai Harir Sultani, who was the superintendent of the Royal Harem and the household lady of Mahmud Begada. Her tomb in the Sultani Mosque is right behind Dada Harir ni Vav.
Built in sandstone in Solanki architectural style, the Dada Harir stepwell is five stories deep. It is octagonal (8-sided polygon) in plan at the top, built on intricately carved large number of pillars. Each floor is spacious enough to provide for people to congregate. It was dug deep to access ground water at that level, accounting for seasonal fluctuations in water level due to rainfall over the year. The air and light vents in the roofs at various floors and at the landing level are in the form of large openings. From the first story level, three staircases lead to the bottom water level of the well, which is considered a unique feature.
At the level of the ground, it is 190 feet long by forty wide. At the east end, from a domed canopy, a descent of eight steps leads to a covered gallery. A second flight of nine steps leads to another gallery, and a third of eight steps to the lowest gallery two or three foot above the level of the water. At each landing a corridor runs along the sides and leads to other galleries that cross the well at intervals.
Built along an east–west axis, entrance is from the East, the two spiral staircases are in West, near the well. The structural system is typically Indian style with traditional trabeate with horizontal beams and lintels. At the bottom of the well is a square stepped floor in the shape of a funnel extending to the lowest plane. This is chiseled into a circular well. Above the square floor, columns, beams, wall and arched openings spiral around; a feature that continues to the top. The top part of the well, however, is a vertical space open to the sky. The four corners of the square are strengthened with stone beams, set at 45 degrees angle. The motifs of flowers and graphics of Islamic architecture blend very well with the symbols of Hindu and Jain gods carved at various levels of the well. The dominant carvings on the upper floors are of elephants (3 inches (76 mm) in size, each of different design).