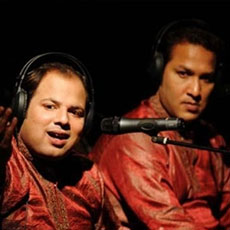 Rizwan-Muazzam Qawwali is a Qawwali group, headed by Nusrat Fateh Ali Khan's nephews, Rizwan and Muazzam. The sons of Mujahid Mubarak Ali Khan, they have been performing together as Rizwan-Muazzam Qawwali since the 1990s. They played their first major concert in 1998 at the Womad Rivermead festival in Reading, England. The two lead singers come from a direct family line of Qawwali music that spans over five centuries. Their grandfather was an uncle of Nusrat Fateh Ali Khan and taught Nusrat the art of qawwali vocal music. They themselves studied under their father, who died in 1996, and were then tutored by Nusrat.

Rizwan-Muazzam Qawwali is made up of two lead singers (Rizwan and Muazzam), five secondary singers leading the choral response and vigorous hand claps two harmonium players and a tabla player. They perform in traditional Qawwali style - sitting on the ground rather than on seats - which they believe brings them closer to God