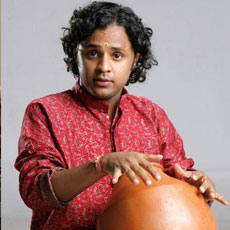 One of the leading musicians in the world of rhythm, Giridhar Udupa had his initial tutelage under his father and the well-known Mridangam artist Vidwan Ullur Nagendra Udupa and later became a disciple of Vidushi Ghatam Sukanya Ramgopal and Vidwan Ghatam V.Suresh.

He performs on the Ghatam, the Indian claypot as well as on varied South Indian percussion instruments including Mridangam, Khanjira and Morsing. He renders Konnakol (syllables) with equal aplomb.